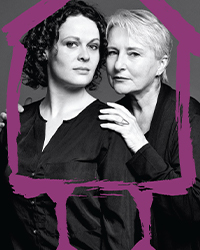 “Bad children are the softest, and the easiest to eat; but a bad man’s bones hold power, power tastes like salt, and we love salt more than anything.”

From the mind that brought you Mustard, a genre-bending fairy tale meets whodunit inspired by the notorious figure of Baba Yaga, the hideous old witch who lives alone in the woods grinding the bones of the wicked.

A gruesome murder in a small town leads a local sheriff, a young detective and a university professor with a taste for younger men into a labyrinth of secret lives, ancient magic and multiple suspects.

A play that gives voice to the wicked old witch, Yaga is part thriller, part revenge play and lots of comedy.