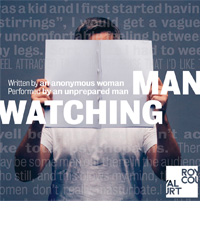 Written by an anonymous woman.
Performed by an unprepared man.

A funny and frank insight into heterosexual female desire, read out loud by a man. The show begins with a male comedian being given a script they have never seen before. They read the script out loud, sight unseen, in front of an audience. This is a show about what one woman thinks about when she thinks about sex with men.

Approximate running time is between 60-75 minutes with no intermission.