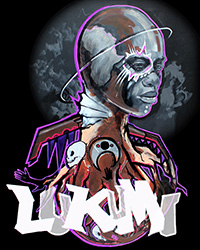 ×
The Watah Theatre presents
The World Premiere of
LUKUMI: A Dub Opera by d’bi.young anitafrika

The Watah Theatre is thrilled to announce the World Premiere of d’bi.young anitafrika’s Award-Winning Dub Opera Lukumi, the final instalment of her gripping Orisha Trilogy featuring the plays Esu Crossing The Middle Passage and Mami Wata & the PussyWitch Hunt. Following rave reviews of its first workshop at the 2016 Summerworks Festival and the winning of NOW Magazine’s Audience Choice award and Summerworks Best Production Honorable Mention, anitafrika returns with the full-length Dub Opera at the Tarragon Theatre Extraspace from September 26 to October 14, 2017 with two preview performances on September 22 and 23. Lukumi is a headlining presentation at Nuit Blanche Toronto 2017: Many Possible Futures.

Lukumi formerly entitled Bleeders, is an Afro-futurist Dub -Opera set in post--apocalypse Turtle Island in 2167, 150 years after WWIII and 100 years after the Period of Explosions (PoE). The PoE saw the widespread meltdown of nuclear power plants – due to global environmental degradation – making the surface of the earth virtually uninhabitable. A group of freedom fighters called the Ohosi Mino live underground in intricate cave systems where they are viciously hunted by The One World Army. Having access to ancient knowledges, the Ahosi Mino must send a Lukumi on a vision quest, descending through eight layers of earth, to find humanity's redemption or to die trying.

Anitafrika, one of only 200 artists to receive a Canada Council New Chapter project grant, is once again experimenting with the boundaries dub theatre. The winner of three Dora awards for Blood.claat and Mami Wata & the PussyWitch Hunt, her other awards include: Golden Beret, KM Hunter Theatre, Mayor’s Arts, Vital People, Canadian Poet of Honor, Toronto Leadership Lab Fellow and YWCA Woman of Distinction in the Arts. She is an internationally celebrated African-Jamaican dubpoet, playwrightperformer, arts-educator, and Artistic Director of Canada’s Watah Theatre, whose trans-disciplinary work – dubpoetry, theatre, music, dance, writing, storytelling – explores themes of identity, gender, sexuality, divinity, the erotic, race, class and the human experience. Anitafrika is the creator of the human development framework – The Anitafrika Sorplusi Method – which has been utilized by The Stephen Lewis Foundation, The Banff Centre, U of T, MaRS, Women’s College Hospital and other institutions globally. She is the published author of 7 books, 7 plays and 7 dub albums.

The will be a 15 minute Q & A after each performance.