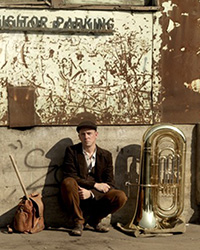 Will Eno, the celebrated and controversial American playwright of The Realistic Joneses, has written a dark, funny, quietly moving examination of one man's search for “home.” He stands before us, seeking our help. We're not sure where he comes from. He seems rather like us, but not. As he unpacks his peculiar story, comparing the odd traditions in his country of birth with the unsettling realities of life here, it becomes increasingly obvious that the resolution to his quest is anything but certain.

Tickets start at $22 Saturday and Sunday matinees are pay-what-you-can based on availability.

“I can’t think of a better actor to play this quirky, awkward, sweetly-sad Narrator than Christopher Stanton…. heartfelt and engaging. Wonderful work… I love (the) activity that director Stewart Arnott has Stanton, the Narrator, engage in… Compelling theatre.” – Lynn Slotkin, The Slotkin Letter

“What do you do when a quiet, shy man talks with you about missing home? When he’s Christopher Stanton… you listen.” – Jon Kaplan, NOW Magazine

“…Stanton portrays the man’s inner battles and his crippling self-consciousness perfectly…This is a subtle, impeccably performed philosophical comedy…Anyone who wants to get to know one of the more profound and distinctive voices in contemporary American drama should make certain not to miss it.” – Christopher Hoile, Stage Door