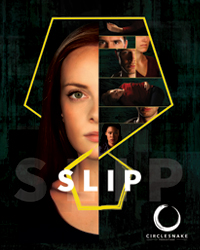 Circlesnake examines mental health, identity, and storytelling in the remount of its critically acclaimed mystery Slip.

Slip follows Detective Lynne Barrett as she tries to piece together a mysterious death: a woman is found dead on the floor of an abandoned apartment with debris strewn everywhere, and a symbol carved into her arm. Her attempts to uncover the truth are disrupted by the overwhelming complexity of the case, and Lynne must untangle a mystery that escapes the simplicity of a single story. The original Slip creative team is joined by award-winning theatre creator and actor Nicole Stamp, who will be taking over for original cast member Paloma Nuñez. Slip is currently nominated for three 2016 My Theatre Awards including Outstanding Production, Outstanding New Work and Outstanding Actress (Alex Paxton-Beesley).

“Terrific performances… The two play comedy as expertly as they do the more serious material.” – Jon Kaplan, NOW Magazine