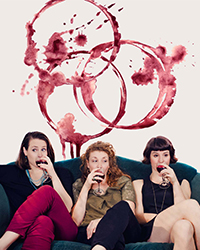 Throughout University, Blaire, Jamie and Skye were best friends. Now many years later Blaire has a new life - wife to an investment banker, executive assistant to an oil tycoon - while Jamie and Skye live in the same house the three inhabited throughout school, one a freelance journalist the other a PHD candidate. Though all would like nothing better than to fall back into their old loving ways, tensions run high as Blaire enters revealing the newest addition to her life: breast implants. And thus we fall into the world of three best friends where the mundane is as important as the immense, where tragedy can become comedy, and where no topic is off limits.

Cue6 Theatre developed We Three using a process adapted from the award winning "The New Colony" in Chicago. (Five Lesbians Eating a Quiche, Kate and Sam are NOT Breaking Up) wherein playwright and director hold a series of workshops allowing the actors to develop the people, moments and story of the play before the script is written. The result is a version of hyper realism that creates characters as complex as the people around us, and ultimately a play that is both hilariously funny and deeply moving.