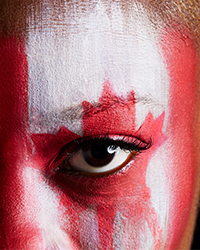 Inspired by the award-winning CBC Radio documentary Habtom’s Path by Mary Lynk, Refuge offers a penetrating look into Canada’s refugee system and confronts the heightened paranoia that can so tragically disrupt our capacity to trust.

East African army deserter Ayinom Zerisenai has landed in Nova Scotia, where his mother already has refugee status. But even as his plight wins the support of immigration lawyer Saul Ackman, questions about his past actions - and his current enigmatic behaviour - begin to haunt Pamel who has taken him under her roof. Are she and her husband harbouring a legitimate refugee - or a terrorist? A harrowing story of the pitfalls of seeking sanctuary in today’s suspicious world.

Refuge was developed through The Collaborations, an initiative of Canada’s National Arts Centre English Theatre.

Performances available for school groups on Wednesday, April 27 and Friday, May 6 at 2pm. Please contact Taylor Trowbridge at 416 944-1740 or marketing@nightwoodtheatre.net for details. Please note this is not a Tarragon Theatre production. Refuge is produced by Nightwood Theatre and is having performances in Tarragon's Extraspace.