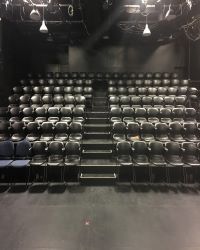 Push…one Mother of a Show

PUSH…ONE MOTHER OF A SHOW dishes the dirt on motherhood

Toronto, ON (April 7, 2011) – After a year of sold-out one-night-only shows, five of Toronto’s funniest women are doing it again...but this time, they're pushing harder. And, they're pushing it all week long. PUSH…ONE MOTHER OF A SHOW, a break-the-mold comedy about modern motherhood directed by Linda Kash starring Fiona Carver, Sarah Carver, Precious Chong and Erin Keaney, hits the stage just in time for Mother’s Day. Tickets are $25.

PUSH…ONE MOTHER OF A SHOW is a fast-paced, edgy comedy that takes an honest and sometimes absurd look at motherhood through sketch comedy, dance and song, It yanks the blinds open and reveals what's really going on in today's households, playgrounds, and workplaces, shedding light on the all too raw truth. It lets the air out of child rearing, multitasking, fatigue, changing libidos, memory loss, incontinence, muffin tops and more. And, most importantly, it’s not all boobs and vaginas…okay, maybe just a little. If you have ever given birth, known anyone who has given birth, or been born yourself, this show is for you.