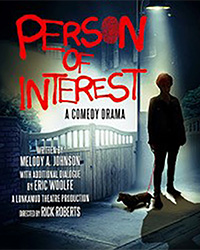 × A comedy drama about a good neighbour gone bad...

Celebrated actor, comedian and theatre creator Melody A. Johnson, returns with her newest solo show Person of Interest. Known for her award winning work in Canadian theatre (Little Mercy's First Murder, I Think I Can, 7 Stories), as well as her many unique comic turns at Toronto’s famed Second City, Johnson returns to Toronto after extended Canadian and UK runs of her self penned Miss Caledonia, (2013 Dora nomination Best New Play and Outstanding Actress, 2014 Ontario Presents Touring Artist of the Year).

Heralded as "...a great eccentric comedienne… (Robert Cushman, The National Post) and, "...the kook supreme of the Canadian stage..." (Richard Ouzonian, The Toronto Star), Johnson is directed once again by Rick Roberts,(Waiting for Godot, Soulpepper Theatre, This Life, CBC), and joining the team with additional dialogue is Eric Woolfe, (The Harrowing of Brimstone McCreedy).

Typecast as a “housebound loser”, this is the mostly true story of an actor driven to the brink by the neighbours from Hell. Audiences who have enjoyed catching the wave of stand alone storytelling (Toronto's Dare, Old Words, and NPR’s The Moth, CBC’s former Vinyl Cafe), will crave this yarn spinning, dark tale. Told simply and skillfully, the comic journey of a good neighbour gone bad will strike a chord with anyone who has ever battled with the people next door.