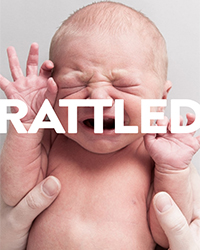 Rattled is a one act play which explores the ways that women without children navigate spaces and relationships with women who do.

Lena’s having a baby shower. Her best friend Paige, childless by choice, is considering a move across the country but struggles to share the news with Lena whose newly-minted mommy status has left her preoccupied. Co-host of the party, Michelle- single and situationally infertile at forty- is doing her best to put on a brave face but finds herself at a crossroads. As games are played and presents are opened, friendships are tested and identities are challenged, making for an awkward afternoon.

The content for Rattled is informed by a series of interviews conducted with a group of women living in Toronto who do not have children.