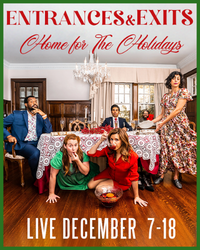 × ENTRANCES AND EXITS: HOME FOR THE HOLIDAYS
Produced & Presented by The Howland Company
In Association with The Tarragon Theatre

The Howland Company marks the return of their iconic comedic play ENTRANCES AND EXITS, with their HOME FOR THE HOLIDAYS special, created by Ruth Goodwin and Elizabeth Johnston. This December, Canadian families are invited to come together on a cold December night to watch eight of Canada’s top comedians work together to improvise a unique, door-slamming theatrical experience.

A special guest performance with iconic Canadian comedian Colin Mochrie will take place on December 7, 8, 9 at 8:00pm and December 11, 2022 at 2:30PM. This performance will be filmed and subsequently available for streaming across Canada for $10 until Wednesday, January 5, 2023.

A uniquely Canadian comedy, ENTRANCES AND EXITS: HOME FOR THE HOLIDAYS invites audiences to reconnect and come together for the holidays through a time warping, perspective-shifting, mind-bending ride of improvisational skill, that has left audiences amazed since 2018. Drawing on inspiration from classic programs like The Judy Garland Christmas Show and The Carol Burnett Show’s Christmas with Carol, this retro, theatre-meets-comedy show is a modern take on the classic TV tradition of nostalgic holiday specials. Follow a cast of incredible improvisers over the course of sixty minutes as they try to salvage a holiday event gone awry in HOME FOR THE HOLIDAYS.

The staged production of ENTRANCES AND EXITS first premiered in 2018 at the Toronto Fringe Festival, where it became an instant sold-out hit, winning Best of Fringe. The popular show was subsequently remounted in 2019 at Bad Dog Theatre and was invited to Toronto’s Sketch Fest, Canada’s premiere comedy showcase, before garnering a Canadian Comedy Award nomination.

We're sorry, the ticket(s) you wanted to Entrances and Exits for the performance on Sunday, December 11, 2022 at 2:30 PM EST have just sold out or the event is no longer available for sale via the internet if the curtain time is nearing.