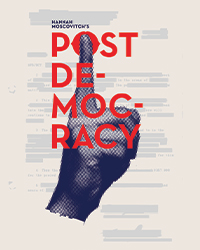 Welcome to the world of the 1%, the corporate elite, the “C-suite” – the “king-makers” whose influence flows through every aspect of our lives virtually unnoticed.

When a CEO and his top executives are on a business trip for a major deal, a damaging sex scandal at the company is unearthed back home. As the pressure to complete the deal mounts, more secrets come to the surface, endangering the CEO’s company, his family, and his legacy. What happens to morality when human beings have limitless power?

Biting and unabashedly oozing with the condition of greed, Post-Democracy asks what is the price of silence envisioned through the remarkable lens of Director Mumbi Tindyebwa Otu.

Please Note: Masks will be required in the theatre.